Natural as well as anthropogenic emissions determine the aerosol and chemical composition of the atmosphere. This has a major impact on cloud formation, on the hydrological cycle and on air quality. In many South American regions the effects of megacities - such as São Paulo, Buenos Aires, etc. - are crucial and have an impact on a regional scale. In other regions the emissions are dominated by natural sources as well as land-use change and biomass burning. The goal of this study is to estimate the impacts of different emission sources.

In South America, the Andes have a significant influence on the atmospheric circulation and on the transport of chemical species, because of the pronounced orographic features. An adequate representation of the Andes within a climate model is only possible with the relatively high horizontal resolution of a regional climate model.

For this study, the latest version of the regional climate model REMO has been extended by an on-line chemistry module. The REMO model includes an improved surface model and several technical modifications, while the chemistry module is based on the Regional Acid Deposition Model (RADM2) (Stockwell et al., 1990) and tracer transport (included in REMO 5.0 with Tracer Extension).

The model calculates the meteorological processes directly together with photochemistry and tracer transport. The advantage over off-line chemistry-transport models – which are driven by the, e.g., hourly output from a meteorological model – is the direct coupling of meteorological and chemical fields, which both are available for each model timestep.

As boundary and initial data for the chemical species concentrations, global output from the Model for Ozone and Related Chemical Tracers (MOZART) (Kinnison et al., 2007) is used. Anthropogenic emission data and fire emission data is taken from the RETRO emission database.

A reference run includes natural as well as anthropogenic emissions. In sensitivity studies the emissions from different sources like megacities or fires are modified. In a comparison the impact of the different emission sources on the regional air quality is obtained.

As an example, results from two sensitivity runs are shown for the simulated April 2000. In the first sensitivity run, all anthropogenic emissions from South American megacities are reduced by 90%, while the second is performed without fire emissions. As April is not part of the main fire season, the impact of the fire-emissions does not correspond to the maximum fire impact of the year. 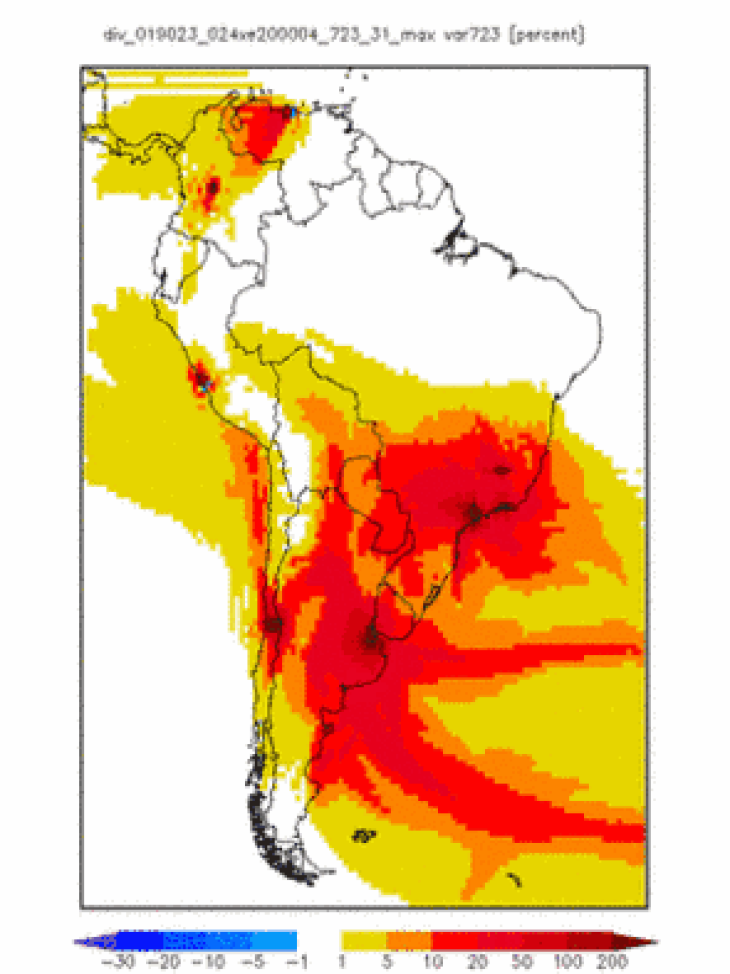 In Figure 1 the maximum ratio for each gridbox (in April) between the sensitivity runs and the reference run of near surface CO concentrations (lowest model layer) is shown. This gives an impression of the extent of air pollution episodes originating from megacities compared to fire emissions and shows which regions are affected.

As South American megacities are located mainly in coastal regions, pollution can be transported long distances over the ocean. This is shown for Buenos Aires where the CO pollution plume reaches far over the southern Atlantic with a relative impact (i.e., the increase from “reduced-megacities” to the reference case) of more than 10%.

We see that coastal regions are more affected by megacities than by the fires in the southern part of South America. The impact of Santiago de Chile, e.g., can reach up to the coast of Peru, although it is simulated to be less than 10% at maximum at the coast of southern Peru. The impact of fire emissions in the Amazon region does hardly reach the coastal areas while large parts of northern Argentina, Paraguay and parts of Brazil and Bolivia are affected by more then 20% by fire emissions.