A subgrid glacier parameterisation for use in regional climate modelling

A subgrid glacier parameterisation for use in regional climate modelling

Due to their unique surface characteristics and their function as hydrological reservoirs, glaciers play a considerable role for water and energy budgets in many alpine areas. Regional climate models (RCMs) are an important tool in the analysis of the corresponding water and energy cycles and for the prediction of future changes in the individual components.

However, mountain glaciers are only represented in an extremely simplified way (or even totally neglected) in state-of-the-art climate models. Their size is usually beyond grid box resolution and only the largest glaciers are treated as static surface boundary conditions with runoff generation on glaciated surfaces being simplified to a very high degree (Fig. 1, upper part). The simulation of a possible feedback of changes in ice cover extent to the atmosphere and of the influence of enhanced glacier melt on runoff conditions is therefore not possible.

To overcome these deficiencies and to represent processes attached to mountain glaciers in an appropriate way, a subgrid glacier parameterisation is being developed and implemented into the RCM REMO. The new scheme includes the explicit simulation of glacier mass and energy balance and dynamically adjusts the glaciated surface fraction of each grid box depending on accumulation and ablation conditions (Fig. 1, lower part). It thereby replaces the static glacier mask used so far. 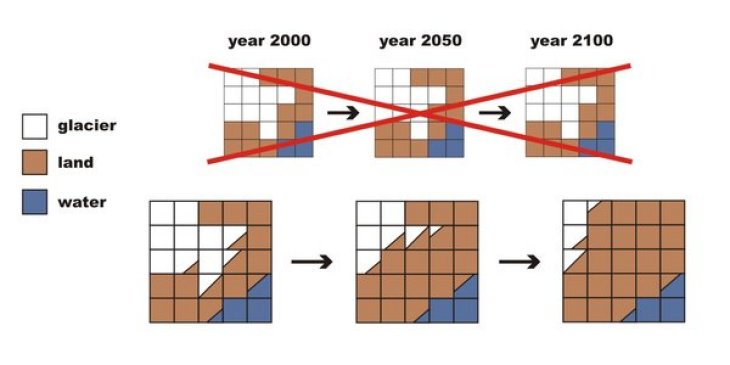 The general concept is to set up a coupled modelling system (Fig. 2) consisting of the RCM REMO, the new glacier subgrid parameterisation (interactively coupled to REMO) and a routing scheme (HD Model). The latter accounts for the lateral transport of water on the land surface within the river system and is coupled to REMO in an offline mode (i.e. REMO provides input to the routing scheme, but the routing scheme does not feed back to the RCM). The HD model allows for the assessment of the effects of changing ice volumes on runoff in glaciated catchments on different temporal scales. 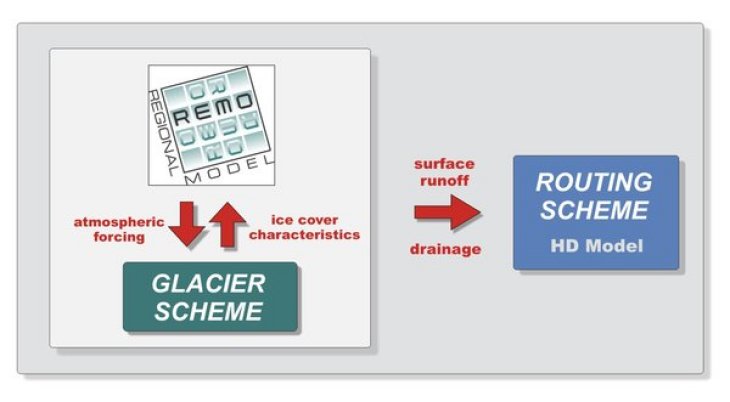 In order to account for glaciers on an RCM-subgrid scale, land ice cover has been introduced as a fourth subgrid surface fraction in addition to ice-free land, water and sea ice (Fig 3). The total glacier ice mass within each climate model grid box is represented by a two-layer ice cuboid with a defined surface area A and a mean ice depth h (Fig. 4). Surface fluxes (sensible heat, latent heat, momentum) are derived separately for glaciated and non-glaciated parts and are averaged within the lowest atmospheric level using the respective surface fractions as weights (tile approach). The glaciated area of an individual grid box is adjusting dynamically depending on accumulation and ablation conditions following a simple volume-area relationship. Surface runoff and drainage originating from the glacier fraction are added to total grid box runoff thus closing the water balance. Important subgrid scale processes (e.g., the redistribution of snowfall or topographic shading) are explicitly accounted for. Large scale ice flow (i.e., flow of ice across RCM grid box boundaries) is neglected.

For the development of the new parameterisation scheme the European Alps have been chosen as a test site. A number of simulations have been carried out for the period 1958-2003 using a horizontal resolution of approx. 18 x 18 km² and an RCM domain covering the European Alps as well as large parts of western and southern Europe (Fig. 5).

In all simulations the lateral boundary forcing is directly provided by the ERA40 re-analysis (Uppala et al., QJRMS, 2005). The glaciated surface fraction and the total ice volume of each grid box have been initialised based on data extracted from the World Glacier Inventory (WGI, World Glacier Monitoring Service, University of Zurich). In the central parts of the Swiss Alps, glaciated surface fractions of up to 50% are reached in 1958 (Fig. 6).

By the year 2003, the simulated ice cover in the Alps has decreased by about 22% (Fig. 7), i.e., the model slightly underestimates the observed decline of glacier area (-22 % for the shorter period 1973-1998, Paul et al., GRL, 2004). The timeseries of simulated specific mass balance roughly follows the estimates given by Dyurgerov and Meier (2005). However, simulated mass balances at the end of the 20th century have a clear positive bias (Fig. 8).