The stratiform cloud scheme in REMO is taken from the MPI Global Model ECHAM4. It is based on the approach from Sundqvist (Sundqvist, 1978). Subgrid cloud formation is included by incorporating fractional cloud cover (parameterised as a non-linear function of grid-mean relative humidity) for each grid box. Prognostic variables are water vapour and cloud liquid water. For these variables, budget equations are solved, taking into account sources and sinks due to phase changes, formation of precipitation by coalescence of cloud droplets and sedimentation of ice crystals. As cloud ice is not prognostic, the amount of ice in the cloud has to be diagnosed.

One basic shortcoming of the stratiform cloud scheme used in REMO was that " the precipitation formation in a mixed phase i.e. in a temperature range between about 0°C and -40°C , can be treated independently for the ice phase and the liquid phase respectively. A proper treatment of the interaction between both phases, such as the rapid condensational growth of ice crystals at the expense of cloud droplets (Bergeron-Findeisen process) will require a more elaborate scheme which should be based on the budget equation for each phase." (DKRZ, 1994).

The changes made in the stratiform cloud scheme have been adopted from the Global Circulation model ECHAM5 where among other things a prognostic equation for cloud ice is implemented. The changes are described in detail in the ECHAM5 manual (Roeckner et al., 2003). The simulation with the modified cloud scheme is called REMO ice in the following.

Applications of the modified cloud scheme 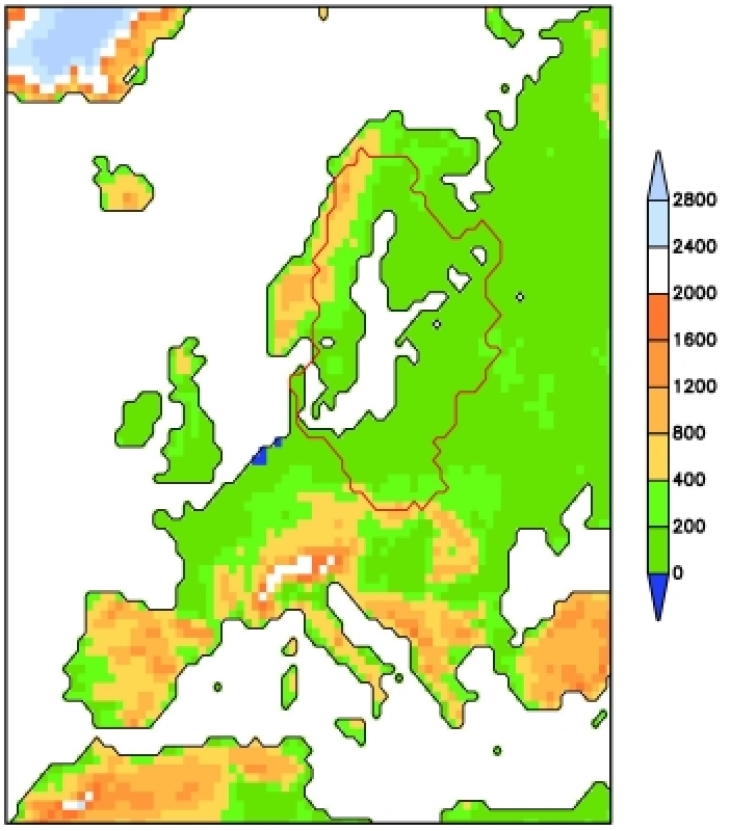 With the modified cloud parameterisation, a simulation of European climate for 1979 to 1993 has been conducted. For the analysis of the simulation, the Baltic Sea catchment, highlighted in the figure left was used. Comparing the simulated results with results from the standard version without the modifications in the cloud scheme shows that on the average, the total amount of precipitation does not change (Fig. 2). The simulation with the modified cloud scheme shows a slight increase in summer precipitation and a slight decrease in winter precipitation. Compared to Observations from the Global Precipitation Climatology Project (GPCP) both simulations agree rather well to the observed values.

Figure 6: histogram of precipitation intensities for the Elbe catchment Area

Back to REMO start page